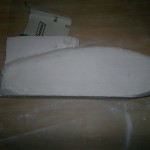 Prototype fuselage for the UAV. 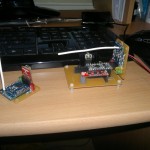 Control board, Mark 1 A 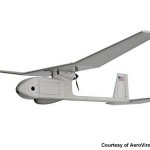 Above are a few pictures of things as they stand at present.

This project, as previously stated, is largely an experiment to improve skills, and produce something tangible. The aim is to produce an autonomous aerial vehicle; capable of flying to a destination co-ordinate, performing a task, and returning to base. (Likely, taking a picture or dropping a tennis ball to wind up Iain’s dogs).

The arduino control board was knocked together quickly to make it more robust than having a proto-board with all the components plugged into it.

In essence, the small red stick visible on the board to the right of the picture is a 9-DOF (Degrees of Freedom) sensor stick, incorporating an accelerometer, a  gyro, and a magnetometer. They communicate with the control board (the blue Arduino Pro Mini) via a two-wire protocol known as I2C; these in turn communicate with a base computer using two XRF modules.

Left to it’s own devices, at present the little ‘Duino will talk to the Accelerometer and, working with a little clever 3-D math, ascertains the direction ‘down’. From this, it then outputs ‘pitch’ and ‘roll’ calculated values over a serial data bus, which is transmitted through the XRF daughterboard, up to a range of 2km, back to the PC via the second XRF, to the left of the picture. Note the little yellow and green LED’s; these flash to show data transmission and reception on each of the boards- Though I have forgotten which is which… it’s in the schematic somewhere if it becomes an issue.

It’s yet to be seen how well this responds to the G-forces generated during flight- Some thought as to an appropriate solution is required. Ideas, on a postcard…

The magnetometer and gyro are currently unused. The magnetometer will eventually determine the direction of the board relative to magnetic north; ‘yaw’. It will also use the gyro to increase the accuracy of the calculated P, Y, R angles.

I have also been working on a fuselage mould; Having discovered that none of the filler types I have access to will adhere reliably to expanded polystyrene, I have decided to change contsruction method for the fuselage of this drone; Likely at this point I will make use of vacuum moulding of ABS plastic, or a moulding made of fibreglass. Wings are to be made of extruded polystyrene- think foam fast food containers, but denser. A CNC machine will be made to produce wing sections.

That’s all for now; More as soon as my student loan allows!
-Matt

(Please ignore the deliberate PCB error of filed down LED’s; I made the footprint wrong, and was too impatient to wait for more to be cut!)